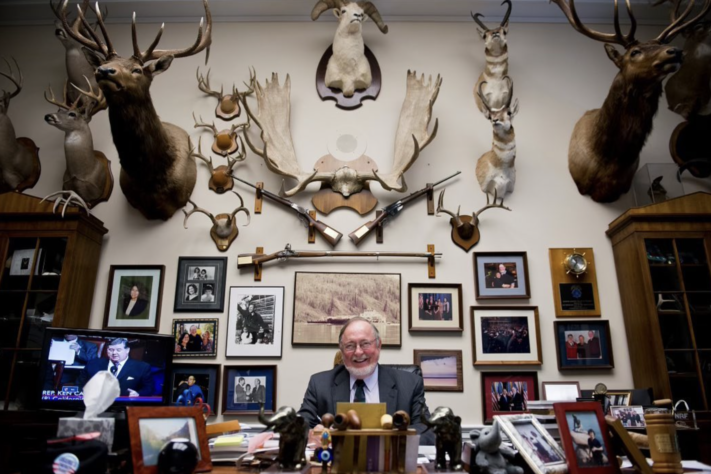 The sportsmen’s community lost a stalwart of an advocate when Rep. Don Young died on March 18. For nearly 50 years, Young served as the sole representative for Alaska and a staunch defender of rural needs and traditions, the Second Amendment, hunting, fishing and trapping.

Young was a huge hunter whose hometown, Fort Yukon, straddled the Arctic Circle and for which he served as mayor in the 1960s. During the late ‘70s and ‘80s he always took the August recess to head up to his moose-hunting camp on the Porcupine and Sheenjek Rivers.

Professionally, his defense of the outdoors was legendary, and he made his mark immediately when testifying against an anti-trapping bill with a foot-hold trap clamped to his hand. At one time he was the only licensed trapper in Congress.

Young was a defender of hunting on federal lands. He battled the Carter Administration over the Alaska National Interest Lands Conservation Act and the formation of new National Parks that would close millions of acres to caribou, moose, brown bear and Dall sheep hunters. Instead, he pushed amendments that converted those lands from “Park” status to “Preserves” – the most notable redrawing within Wrangell-St. Elias National Park that protected crucial Dall sheep hunting areas. He was always there for key wildlife issues and was a major force in the creation of the Congressional Sportsmen’s Caucus in 1988-89.

“Don was a big bear of a guy. He wasn’t the most articulate or refined member of Congress, but he stuck by his principles and never backed away from a fight to defend what he thought was right – including fishing, hunting and trapping,” said Bill Horn, Sportsmen’s Alliance legal counsel and collaborator with Young. “It was my great personal and professional fortune to have met him so many years ago, to have worked for him four years starting in 1977, and then to have worked with him for the following decades on issues we both cared about. It’s hard to believe he’s gone, but he cut a wide swath, made his mark, and certainly will not be forgotten.”

Our thoughts and prayers are with Don and his family.

Find out what issues our Government Affairs department is currently battling to protect your outdoor heritage.
END_OF_DOCUMENT_TOKEN_TO_BE_REPLACED

By becoming a member of Sportsmen's Alliance you’re taking an important step to help protect and promote our outdoor heritage. Join today to create a powerful and unified voice for sportsmen across the country. END_OF_DOCUMENT_TOKEN_TO_BE_REPLACED