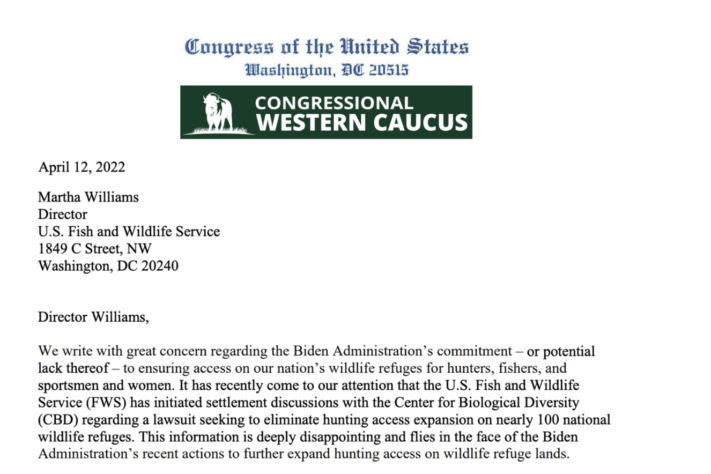 Opposition to the Biden administration’s ongoing negotiations with an extreme environmental and animal-rights organization concerning hunting, fishing and trapping on National Wildlife Refuges continues to grow as 33 members of Congress have joined the chorus of 41 national sportsmen’s organizations.

The letter further states dismay at the decision to negotiate possible settlement options with the Center for Biological Diversity, whose sue-and-settle tactics are well documented and counterproductive to conservation.

“Shockingly, rather than defending the 2020 Rule in court, FWS initiated settlement discussions with this litigious special interest group, whose long track record of filing frivolous lawsuits has done nothing to further effective conservation efforts across the country … We are deeply concerned by these settlement discussions and the fact that the Administration has chosen not to publicly declare their intent to defend the expansion of access to our nation’s wildlife refuges,” wrote the lawmakers. “It is hard to imagine any settlement would not involve the loss of hunting opportunities … We are especially concerned that the settlement may invoke policies set during the Obama Administration banning the use of traditional ammo and tackle on all refuge lands. This is unacceptable.”

“The Sportsmen’s Alliance would like to thank these elected officials for standing up for hunters, anglers and trappers – America’s most consistent and engaged conservationists who have funded refuges to the tune of $1 billion,” said Evan Heusinkveld, president and CEO of the Sportsmen’s Alliance Foundation, which first revealed the settlement talks and has spearheaded the opposition. “We hope Director Williams and Secretary Haaland take this opportunity to reverse course and work with the nation’s sportsmen against this baseless lawsuit.”

The diverse spectrum of sportsmen represented by the coalition of the Sportsmen’s Alliance Foundation, Rocky Mountain Elk Foundation, Safari Club International and National Rifle Association were recently denied intervenor status in the lawsuit and were forbidden from even filing a brief expressing specific concerns in their areas of expertise. The uncontested and unusual ruling recently came at the sole discretion of U.S. District Court Judge Donald Molloy. The hunting coalition is weighing legal options moving forward. Any appeal of the ruling would be to the 9th Circuit Court of Appeals.

Find out what issues our Government Affairs department is currently battling to protect your outdoor heritage.
END_OF_DOCUMENT_TOKEN_TO_BE_REPLACED

By becoming a member of Sportsmen's Alliance you’re taking an important step to help protect and promote our outdoor heritage. Join today to create a powerful and unified voice for sportsmen across the country. END_OF_DOCUMENT_TOKEN_TO_BE_REPLACED