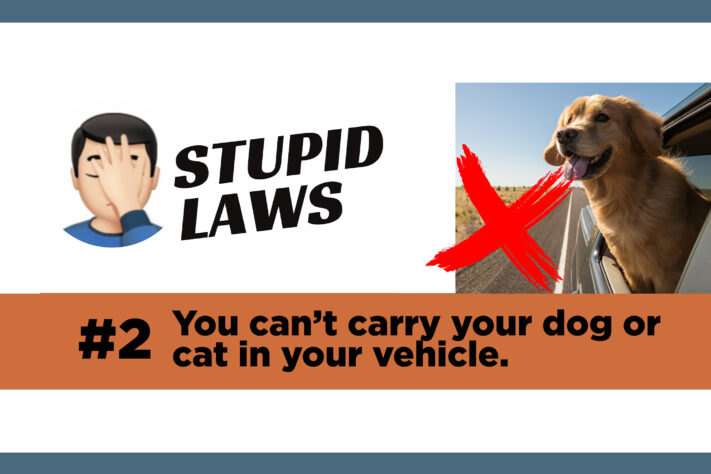 Yesterday the Sportsmen’s Alliance highlighted the #1 stupidest idea contained in a newly introduced “Animal Control Ordinance,” (ACO) the most radical animal cruelty law ever proposed in the United States, with the added head-scratcher that this awful piece of legislation did not originate in Boston, Massachusetts or Washington DC, but instead in a rural Louisiana parish called St. Landry. Today we call attention to the second of the Seven Stupid Ideas contained in this massive government overreach.

The reader would be forgiven if this headline strains credibility because, who, on earth would want to outlaw one of the most memorable images any dog owner enjoys of driving down the road with their trusty companion hanging their head out the window enjoying the cool air? But that is exactly what the ACO would do if St. Landry Parish adopts the ACO on November 16th.

“Any person who intentionally or with criminal negligence… carries, or causes to be carried, a living animal in or upon a vehicle, or otherwise, in a cruel or inhumane manner shall be guilty of cruelty to animals.”

Whether on private property or if a person is out and about, transporting an animal in or on a vehicle would be considered animal cruelty. Those found guilty of the new crime of traveling with a dog would face a fine up to $500 and even prison, up to 6 months! And have a criminal record as an animal abuser.

“The real question is whether people can take parish officials word for it,” wondered Todd Adkins, vice president of government affairs. “It was only last year that the Director of the St. Landry Parish Animal Control Center was charged with theft in office, and now they’re going to fast-track this ridiculous proposal.”

#2 Riding in Cars with Dogs is Prohibited

Tomorrow’s Stupid Idea #3: Everyone is a Breeder!

Find out what issues our Government Affairs department is currently battling to protect your outdoor heritage.
END_OF_DOCUMENT_TOKEN_TO_BE_REPLACED

By becoming a member of Sportsmen's Alliance you’re taking an important step to help protect and promote our outdoor heritage. Join today to create a powerful and unified voice for sportsmen across the country. END_OF_DOCUMENT_TOKEN_TO_BE_REPLACED