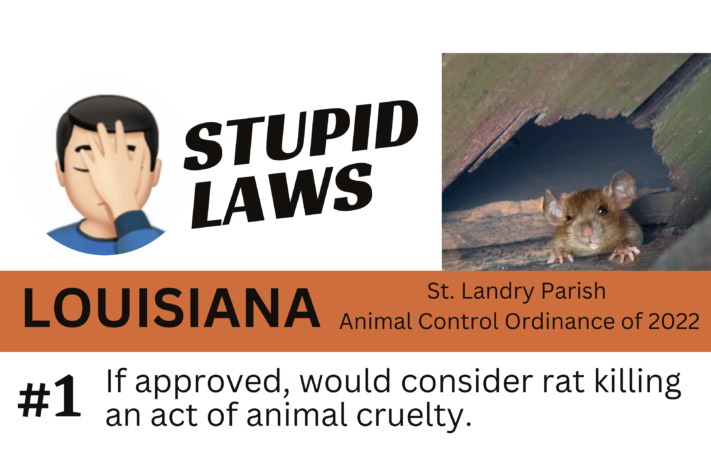 As an organization that fights against animal rights extremism at all levels, the Sportsmen’s Alliance sees a ton of really bad ideas that would allow predator populations to explode, rabies carriers to proliferate, and crops to be ravaged…all in the name of protecting animals. It would be only natural for a person to assume such stupidity would only originate in northern big cities like New York or out on the west coast in places like Los Angeles or Portland. But when it comes to the stupidest piece of legislation ever introduced in the name of animal welfare, one has to travel way down south to the bayou to St. Landry Parish, which is to the west of Baton Rouge.

Next week, November 16, 2022, the St. Landry Parish Council will consider a proposal which has achieved the high honor of being the most radical animal cruelty proposal ever introduced while at the same time being the dumbest. In honor of this high achievement, the Sportsmen’s Alliance will spend the next seven days leading up to the vote on the measure highlighting the “Seven Stupidest Ideas” in the so-called, “Animal Control Ordinance” (ACO) of 2022.

The ACO is a whopping 30-plus pages of new law, making criminals out of the law-abiding, but perhaps the absolute stupidest aspect of the proposal is that it fails to exempt pest control from what is considered “animal cruelty.” So, when you’re trying to keep roof rats out of your attic, you’d better be careful because St. Landry Parish’s new law, if approved, would consider rat killing an act of animal cruelty, opening up the potential for criminal charges and fines.

“The Sportsmen’s Alliance contacted St. Landry Parish to inquire about the pending vote and was told, “it will be approved,” explained Todd Adkins, vice president of government affairs at the Sportsmen’s Alliance. “We feel it is critical for the public to know just how radical, and yes, I must say, stupid this 30-page monstrosity truly is. Whether they intended to or not, the ACO protects rats. It is the Louisiana Rat Protection Act.  And stay tuned, tomorrow we will release the Second Stupidest Idea in the ACO. It’s another doozy.”

Concerned citizens, homeowners, and pet owners must contact St. Landry Parish Council Members and voice their opposition to this massive government overreach.  Please use the button below to take action now and let them know how you feel. If you have family and friends who live in St. Landry Parish, make sure you let them know about this shocking example of government overreach.

Find out what issues our Government Affairs department is currently battling to protect your outdoor heritage.
END_OF_DOCUMENT_TOKEN_TO_BE_REPLACED

By becoming a member of Sportsmen's Alliance you’re taking an important step to help protect and promote our outdoor heritage. Join today to create a powerful and unified voice for sportsmen across the country. END_OF_DOCUMENT_TOKEN_TO_BE_REPLACED