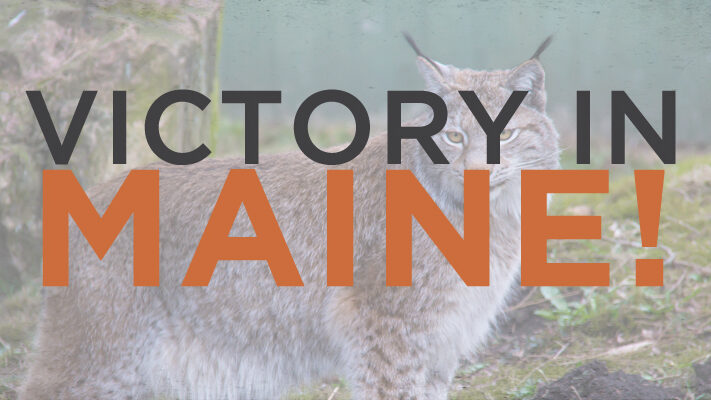 The U.S. Court of Appeals for the First Circuit officially dismissed an appeal brought by animal-rights organizations concerning the trapping of Canada lynx in Maine, likely ending a multi-year, multi-lawsuit court battle concerning the protections offered the predator in the state.

The dismissal of the appeal by the animal-rights organizations was directly attributable to the overwhelming strength of the thorough ruling by U.S. District Judge Jon Levy won earlier this year by Sportsmen’s Alliance Foundation in conjunction the Maine Trappers’ Association, the U.S. Fish and Wildlife Service and the State of Maine. The animal-rights organizations were forced to tacitly accept that state biologists who persuaded the U.S. Fish and Wildlife Service to grant Maine and Maine’s trappers an Incidental Take Permit (ITP) acted in the best interests of fish, game and endangered species in Maine.  This federal permit guarantees that trappers who accidentally catch a protected lynx while trapping for other species will not be prosecuted for violation of the Endangered Species Act.  Judge Levy’s ruling upheld the ITP.

The lawsuit sought to revoke the Incidental Take Permit, which would subject individual trappers to prosecution for Endangered Species Act violations. The result was a ruling that the U.S. Fish and Wildlife Service’s grant of the ITP was lawful and in keeping with the requirements of the ESA. In essence, Judge Levy’s opinion was “bullet proof.” The anti-trapping groups Center for Biological Diversity, the Wildlife Alliance of Maine, the Animal Welfare Institute and Friends of Animals filed a notice of appeal but then had no recourse but to surrender and end the appeals process.

“This was essentially another a backdoor attempt to use the Endangered Species Act to stop trapping in the state of Maine,” said Evan Heusinkveld, president and CEO of the Sportsmen’s Alliance. “Using the Endangered Species Act to undermine wildlife management is a favored tactic of animal-rights organizations, which raise millions of dollars on emotional rhetoric and imagery in an effort to tie any delisting of a potential game animal up in the court system for years. Now that we’ve put yet another frivolous lawsuit brought by animal-rights extremists to bed, we can focus on the ongoing wolf case and upcoming grizzly lawsuits.”

The Sportsmen’s Alliance Foundation has been involved in the fight to delist Great Lakes wolves for nearly a decade, and is awaiting a ruling to legal arguments made in the case last October. Likewise, the Sportsmen’s Alliance Foundation is evaluating the merits and arguments of Native American tribes and animal-rights organizations opposed to the delisting of a recovered population of grizzly bears in the Greater Yellowstone Ecosystem in Idaho, Wyoming and Montana.

Find out what issues our Government Affairs department is currently battling to protect your outdoor heritage.
END_OF_DOCUMENT_TOKEN_TO_BE_REPLACED

By becoming a member of Sportsmen's Alliance you’re taking an important step to help protect and promote our outdoor heritage. Join today to create a powerful and unified voice for sportsmen across the country. END_OF_DOCUMENT_TOKEN_TO_BE_REPLACED