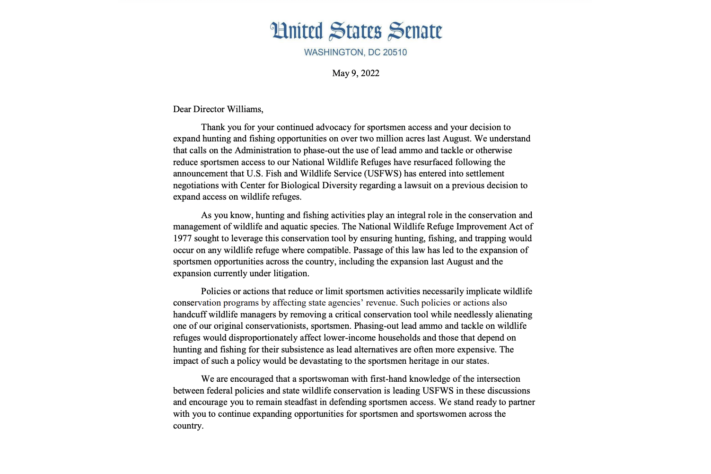 A bi-partisan coalition of 27 U.S. Senators recently signed a letter to U.S Fish and Wildlife Service Director Martha Williams urging the service to reject calls by an extreme environmental organization to ban the use of lead ammunition and fishing tackle throughout the National Wildlife Refuge System.

The senators’ letter echoes an earlier memo from 33 members of the U.S House of Representatives and a diverse coalition of more than 40 outdoor conservation and advocacy organizations led by the Sportsmen’s Alliance Foundation, which opposed closed-door settlement talks between the Biden administration and Center for Biological Diversity. It comes as the USFWS has released draft rules for multiple refuges that phases out the use of all lead by sportsmen.

“Policies or actions that reduce or limit sportsmen activities necessarily implicate wildlife conservation programs by affecting state agencies’ revenue. Such policies or actions also handcuff wildlife managers by removing a critical conservation tool while needlessly alienating one of our original conservationists, sportsmen,” the lawmakers wrote. “Phasing-out lead ammo and tackle on wildlife refuges would disproportionately affect lower-income households and those that depend on hunting and fishing for their subsistence as lead alternatives are often more expensive. The impact of such a policy would be devastating to the sportsmen heritage in our states.”

In November 2021, the Center for Biological Diversity filed suit over President Trump’s 2020 expansion of hunting and fishing opportunities on 2.2 million acres within the refuge system. The litigious group alleges that hunting on refuges threatens endangered species because hunters trample critical habitat, through lead poisoning from spent ammunition and fishing tackle, and because grizzly bears could be mistakenly shot by hunters believing them to be black bears or in self-defense.

While any settlement between the two parties would result in undeniable losses for sportsmen, as well as financial gain for the radical organization known for its sue-and-settle tactics, early indications pointed to the Biden administration, through Secretary of the Interior Deb Haaland and Director of Fish and Wildlife Martha Williams, negotiating over the use of lead ammunition and fishing tackle in the refuge.

A prohibition on the use of any lead could impact millions of sportsmen, both hunters and anglers, in every state in the country. Sinkers, jigs or other lures containing lead could be banned for fishing, while expensive and hard-to-find alternative ammunition would be the only resort for hunters.

Find out what issues our Government Affairs department is currently battling to protect your outdoor heritage.
END_OF_DOCUMENT_TOKEN_TO_BE_REPLACED

By becoming a member of Sportsmen's Alliance you’re taking an important step to help protect and promote our outdoor heritage. Join today to create a powerful and unified voice for sportsmen across the country. END_OF_DOCUMENT_TOKEN_TO_BE_REPLACED