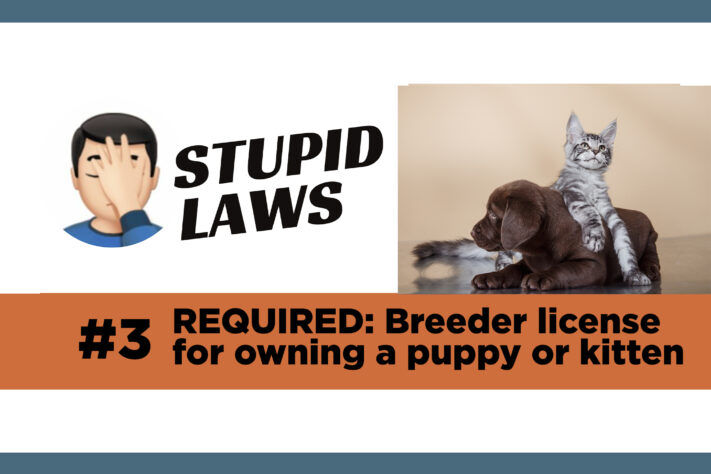 In its ongoing series highlighting the Seven Stupid Ideas contained in a new animal control proposal in a small town in Louisiana, the Sportsmen’s Alliance has highlighted the proposed Animal Control Ordinance (ACO) bans killing rats and riding in cars with dogs. But in addition to outlawing things everyday Americans do, the St. Landry Parish Council’s 33-page proposal also intends to greatly expand its own power, by forcing licensure on nearly anyone who owns a dog. Now a person might say, “Wait! That’s not out of the ordinary. Towns across America require licenses for dogs.” And that would be true. But towns across America do not require anyone who raises a dog to be licensed as a breeder, and that is exactly what the ACO requires.

Stupid Idea #3 – Everyone is a Breeder

According to the ACO’s Definitions: “Breeder means a person who breeds or raises dogs and/or cats of any breed or breed(s) on his/her premises.”

This means that a resident of St. Landry Parish that owns and/or raises a kitten or puppy is considered a breeder. There is no arguing with the language of the ACO. Raise a dog, you’re a breeder. Moreover, the ACO amps this up even further for any person who sells a single animal of any kind. If you do so, you are a “Commercial Kennel.”

“Commercial kennel means any person engaged in the commercial breeding, individually or in any quantity, or in the boarding, training, sale, or hire of animals for compensation.”

Your dog accidentally becomes pregnant courtesy of the dog next door, and you put a sign up by your mailbox selling puppies? You are a “Commercial Kennel.” And yet the ACO is more ludicrous than that. Sell that hamster that your kid promised to feed and care for but never does? You are a “Commercial Kennel,” because this definition applies to any animal sold in any quantity.

What does it matter to be considered a Breeder or Commercial Kennel by the powers that be in St. Landry Parish? It matters because the ACO requires that the person purchase an annual permit. And this is where the intrusiveness and utter nonsense of the ACO is again revealed.

To purchase the permit to raise a dog or sell a gerbil, the applicant must also purchase a Class A or B animal dealer’s license from the United States Government or prove why the federal Animal Welfare Act does not apply. Further, the applicant must provide a Sales Tax Identification Number or provide the reason why it is not required. And finally, the person must show a valid Occupational License issued by St. Landry Parish itself.

Hiring a lawyer will likely allow an applicant to avoid licensure by the federal government or to demonstrate why they don’t need a Sale Tax ID. But the attorney won’t be able to get the applicant out of purchasing the additional license required by St. Landry Parish.

“Raise a puppy or sell your tropical fish to the neighbor, and you will be required to purchase not just one but two government licenses by the friendly government of St. Landry Parish!” explained Todd Adkins, vice president of government affairs for the Sportsmen’s Alliance. “And here’s the kicker. Anyone purchasing the Breeder Permit is subject to inspections of their premises twice per year. This is big government on steroids.”

#1 Rat Killing is Illegal
#2 Riding in Cars with Dogs is Prohibited
#3 Everyone is a Breeder and must be licensed!

Find out what issues our Government Affairs department is currently battling to protect your outdoor heritage.
END_OF_DOCUMENT_TOKEN_TO_BE_REPLACED

By becoming a member of Sportsmen's Alliance you’re taking an important step to help protect and promote our outdoor heritage. Join today to create a powerful and unified voice for sportsmen across the country. END_OF_DOCUMENT_TOKEN_TO_BE_REPLACED