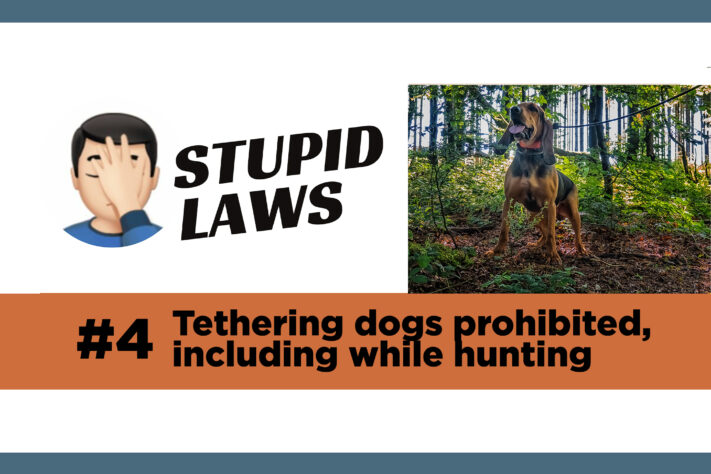 As we’ve outlined throughout the week, St. Landry Parish will consider a proposed Animal Control Ordinance (ACO) that does all the wrong things while doing little to actually promote animal welfare. In previous discussions, we’ve described how the massive ordinance will make pest control a crime, prohibit carrying animals in vehicles and will define all animal owners as breeders requiring a license. If the list of stupid ideas in this 33-page proposal ended here, the Parish Council would be perfectly justified in voting it down, but, unfortunately, the list continues….

Stupid Idea #4 – Tethering an Animal is a Crime?

The ACO is very clear on this point: tethering an animal without supervision is prohibited.  There is no exception for training, field trialing or hunting. In numerous training exercises, trialing and while hunting, dogs are often temporarily tethered, but the ACO fails to recognize this fact. Even more problematic, this is often done to protect the dogs from harm.

Moreover, it appears that animal control officials will be the ones to decide when a tethered dog is “supervised” or when it is not, leaving many dog owners subject to the whim of animal-control investigators.

As with many other provisions, the ACO takes this unworkable “supervised” issue and doubles down on excess. The tethering section lists out 12 different requirements that must all be met for tethering to be ok. Included in this list, “…The dog shall be neutered or spayed unless the dog is tethered within another secured enclosure….” This means that you cannot tether an intact dog outside of a fenced yard – like when hunting, trialing or training – even temporarily, for whatever purpose, anywhere, ever.

For violators of this no tethering policy, authorities “shall” impound the animal if the owner “has no other means to confine the animal.” Well, this is one of those lawyer trick bags because if I’m cited for tethering while hunting, I obviously have no other means of confinement in such cases. If supporters of the ACO claim they “didn’t mean to do that,” then we ask they do a better job of actually writing what they meant.

“I can’t tell if this is terrible drafting or if the supporters of this measure really want to stop all tethering during hunting, trialing or training,” said Todd Adkins, vice president of government affairs at Sportsmen’s Alliance. “I’ve tethered dogs hundreds of times in such cases, often to protect my dogs from potential harm, but whoever is behind this proposal doesn’t care about that, they just want to shut all of us down.”

Find out what issues our Government Affairs department is currently battling to protect your outdoor heritage.
END_OF_DOCUMENT_TOKEN_TO_BE_REPLACED

By becoming a member of Sportsmen's Alliance you’re taking an important step to help protect and promote our outdoor heritage. Join today to create a powerful and unified voice for sportsmen across the country. END_OF_DOCUMENT_TOKEN_TO_BE_REPLACED