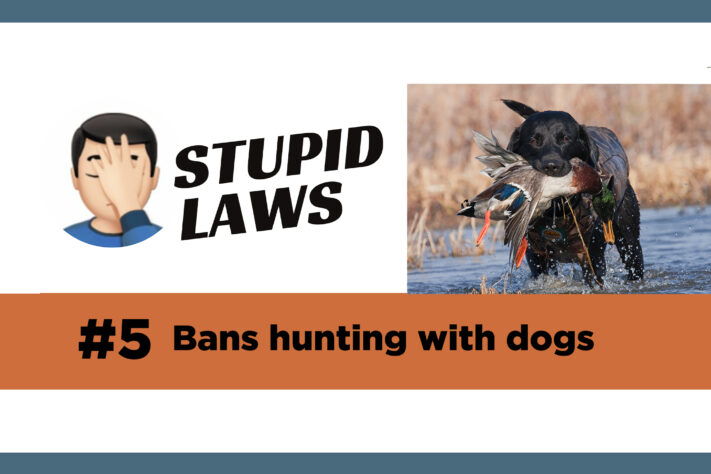 Big-city animal-rights extremists appear to have invaded the deep South, or at least taken over the drafting of animal-control ordinances in one Louisiana locality – St. Landry Parish – as a proposed “Animal Control Ordinance” (ACO) seeks, among other things, to make the use of dogs while hunting a violation of law.

The Sportsmen’s Alliance has previously reported on the numerous ways this 30-plus page proposal will wreak havoc on homeowners, pet owners, hunters and just about everyone else in the parish. We’ve highlighted stupid ideas #1 (no rat killing), #2 (no dogs in cars), #3 (everyone is a breeder) and #4 (no tethering for hunters), all of which would be comical if not for the serious consequences and criminal ramifications for violations of each. To be clear, all of these violations incur heavy fines with many including potential jail time for offenders.

Unfortunately, our work is not yet done, and we will continue to report one stupid provision after another, all the way up to the hearing on Nov. 16. And if the previous examples already seem extreme, today’s report covers a provision that should chill every resident of the parish completely to the bone.

Stupid Idea #5 – No Hunting with Dogs

The ACO prohibits dogs running at large, which many of us are likely to agree with. Common sense suggests that dogs running the streets is not a good idea. But as with so many other provisions in the ACO, the wording of the ordinance matters. The running at large section provides:

To understand this section, the definition of “at large” found earlier in the ordinance is:

At large and stray mean any animal … which is not within the confines of the owners’ home, dog yard, pen, or fenced area or is not under the direct control of the owner or designated handler by means of a leash.

In plain language, this means a violation of the ACO occurs when a hunter has a dog anywhere that is not their own property, and the dog is off a leash. For anyone who knows anything about hunting with dogs, the use of a leash is simply not possible in 99% of cases. Hunting on public property? No dogs. How about on your friend’s place or where you have permission to hunt?  Nope, this also a violation. Moreover, and this is where the extremism of this proposal shines through, this prohibition means that when your dog accidentally gets on property adjacent to your own while hunting, you have violated the ordinance and are now a criminal.

“This is one where you have to ask if anyone is actually thinking about what they are doing or even trying to do,” said Todd Adkins, vice president of government affairs for the Sportsmen’s Alliance. “This one restriction stops just about all hunting with dogs. Holy cow, are they serious?”

Find out what issues our Government Affairs department is currently battling to protect your outdoor heritage.
END_OF_DOCUMENT_TOKEN_TO_BE_REPLACED

By becoming a member of Sportsmen's Alliance you’re taking an important step to help protect and promote our outdoor heritage. Join today to create a powerful and unified voice for sportsmen across the country. END_OF_DOCUMENT_TOKEN_TO_BE_REPLACED