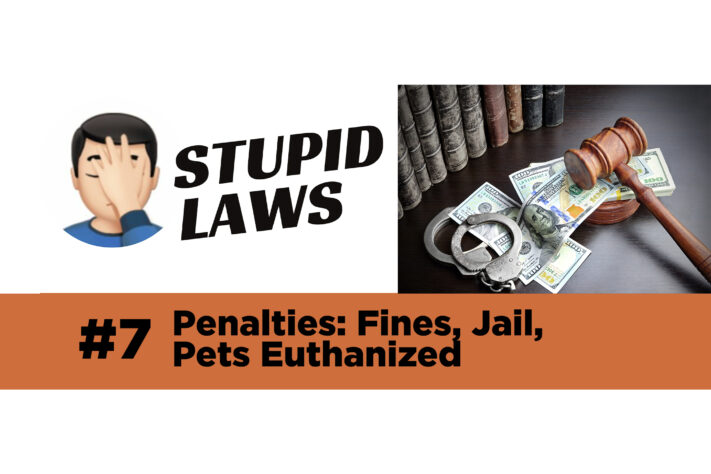 For the last seven days, the Sportsmen’s Alliance has applied a tongue-in-cheek approach to the most radical animal cruelty proposal ever introduced. St. Landry Parish’s Animal Control Ordinance, or ACO, is loaded with massive government overreach, broad expansion of government power and criminalizes activities enjoyed by everyday Americans on a daily basis.

The proposal contains so many outrageous items that the Sportsmen’s Alliance has been highlighting the Seven Stupid Ideas in the ACO as a means of showcasing for St. Landry Parish residents just how overreaching this proposal is. The ACO:

The seventh and final installment of this series loses its humorous tone because there simply is no way to treat St. Landry Parish’s authoritarian animal-extremism as a joke.

Stupid Idea #7 – The Penalties in the ACO Are Dangerous

Dangerous you might ask? Is that really what the Sportsmen’s Alliance is claiming? That is indeed what we’re claiming.

Citizens caught trapping or poisoning a rat, transporting a dog in a vehicle, using a tether while hunting would all be guilty of animal abuse under the ACO. These violations result in the automatic seizure of the animals involved and/or potential jail time. And that is where the ACO stops being a funny mistake:

These penalties for common practices are just the tip of the iceberg. Breeders, which are nearly all animal owners under the ACO, must open their premises, including their houses, twice a year to government inspection. A person whose dog chases another dog must build a fence for their “potentially dangerous dog.” A person who tethers an unspayed or unneutered dog cannot reclaim their animal unless they build a fence to contain it. That is, of course, if the parish has not given the animal to someone else or killed it because the shelter is full.

“The ACO allows the government to seize your animals for ridiculous reasons, and then give them away or kill them while you try to sort the issue out in court,” said Todd Adkins, vice president of government affairs with the Sportsmen’s Alliance. “And as a bonus, the ACO requires you to pay the government for the experience of being railroaded by an out-of-control parish government. Did council members even bother to read the ACO before scheduling it for a vote on November 16th?”

St. Landry Parish residents are encouraged to voice their opinions, using the TAKE ACTION button below, on this outrageous proposal, and Louisiana citizens in general should be on high alert to see if any of these ideas have been discussed or proposed in their own communities.

Don’t forget to let your family and friends who live in St. Landry Parish know about this egregious government overreach and urge them to also contact the parish council urging them to oppose the Animal Control Ordinance.

Find out what issues our Government Affairs department is currently battling to protect your outdoor heritage.
END_OF_DOCUMENT_TOKEN_TO_BE_REPLACED

By becoming a member of Sportsmen's Alliance you’re taking an important step to help protect and promote our outdoor heritage. Join today to create a powerful and unified voice for sportsmen across the country. END_OF_DOCUMENT_TOKEN_TO_BE_REPLACED